Reflections on Kahlil Gibran’s The Prophet 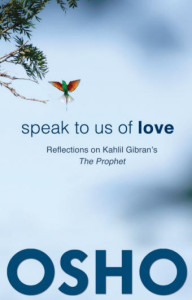 Mystics are the Greatest Creators

Mystics are the greatest creators in the world – but their creativity is not visible. They are not sculptors so that you can see their statues and they are not poets so that you can see their poetry. They are not potters and they are not dancers and they are not singers. What do they create? They create man, they create higher peaks of consciousness in humanity. All that is great in man has been created by the mystics, but it is invisible, obviously.
I would like to say to you that the mystics will not come to your marketplaces, you will have to go to the mystics. Because in the marketplace they will not be understood. What kind of commodity have they brought? Even the flute player can convince people that he has brought something, he has brought some entertainment – a beautiful song. But what is the mystic going to show?
His hands are empty, but his soul is full.
But to see that, you will have to go to the mystics, because only those in whose being the urge, the search for truth has arisen, will be able to understand something. Osho- The Messiah, Vol 1

Impressie van Speak to Us of Love

Introducing us to the most famous poems of the Lebanese poet Kahlil Gibran, Osho takes the reader into a mystical world, addressing essential issues in everybody’s life. The famous verse that gives the title to this book is about “love” – but not the ordinary love we know from novels and movies. Speak to us of Love gives a taste of a contemporary mystic at work, trying to disrupt our dreams, illusions, and the state of unconsciousness that prevents us from enjoying life to the fullest.
This is about and for the millions of people in the world who have killed their love with their own hands, and who are now miserable. They never wanted to kill it, there was no intention to kill their love, but in their unconsciousness they started possessing. Husbands possess their wives, wives possess their husbands, and parents possess their children. Teachers are trying in every possible way to possess their students. Politicians are trying to possess countries. Religions are trying to possess millions of people and control every aspect their lives. This book shows that life can only thrive in freedom. Love never allows anyone to possess it, because love is our very soul. Osho,Speak to Us of Love

Freedom: The Innermost Substance of Freedom
The true freedom has nothing to do with the outside world. The true freedom is not political, is not economic; it is spiritual. Political freedom can be taken away at any moment; economic freedom can disappear just like a dewdrop in the early morning sun. They are not in your hands. And that which is not in your hands cannot be called true freedom. True freedom is always spiritual. It has something to do with your innermost being, which cannot be chained, which cannot be handcuffed, which cannot be put into a jail. Yes, your body can suffer all these things, but your soul is intrinsically free. You don’t have to ask for it, and you don’t have to struggle for it. It is already there, this very moment. If you turn inward, all chains, all prisons, all kinds of slaveries disappear – and there are many.

Freedom is only one; slaveries are many – just as truth is one, lies can be thousands. And an orator said, Speak to us of Freedom. The orator is only articulate with words. He talks about freedom, about love, about beauty, about good, but he only talks; his oratory is nothing but a training of the mind. The orator has no concern with realities. His world consists only of words – which are impotent, without any content – and his art is to manage those impotent and contentless words in such a way that you are caught in the words. It is very relevant that an orator asked Almustafa, Speak to us of freedom. What exactly is the innermost substance of freedom? – that you are free from the past, that you are free from the future. You do not have memories binding you to the past, dragging you always backward – that is against existence: nothing goes backward. And your freedom is also from imagination, desire, longing – they drag you toward the future.

Neither the past exists nor the future exists. All that you have in your hands is the present. The man who lives in the present, unburdened of past and future, knows the taste of freedom. He has no chains – chains of memories, chains of desires. These are the real chains which bind your soul and never allow you to live the moment that is yours. As far as I am concerned, I don’t see that without a meditative mind one can ever be in

freedom. In India, what you have known in the West as paradise is known as moksha. Moksha means freedom. Paradise does not mean freedom, paradise comes from a Persian root, phirdaus, which means “a walled garden.”
But don’t forget that it is a walled garden: it may be a garden, but it is a prison. The biblical story says that God became annoyed with Adam and Eve and threw them out of the Garden of Eden. Into what? Where? If you ask me, it was a curse hiding the greatest freedom, the greatest blessing. They were out of the prison, and that was the beginning of humanity. Now the whole sky and the whole earth was theirs, and it was up to them what they make of it. It is unfortunate that they have not been able to create a free world. Each nation has again become a walled prison – not even a walled garden. Osho, Speak to Us of Love

Previous: The Song of Ecstasy
Next: Sufi’s the People of the Path