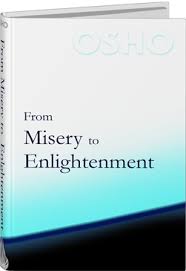 Het boek ‘From Misery to Enlightenment’ is verkrijgbaar bij de Boekhandel of via internet.

Impressie van ‘From Misery to Enlightenment’

Excerpt from: From Misery to Enlightenment, Chapter 1

The child is the father of the man, and down the centuries we have been destroying the child. And once the child is destroyed, the whole life becomes unnatural, miserable, meaningless.

The question is, Why has every society, every civilization tried to spoil the child? It is something very important to understand, that all that we have created up to now – social structures, religious philosophies, teaching systems – knowingly or unknowingly all need a miserable man for their existence. They are parasites.

All these institutions which exist upon your misery are bound to create more and more misery; that is their feeding ground, that is their food. A miserable man is bound, sooner or later, to end up in a religion because he will need consolations. He does not have reality to support him; he will need fictions to substitute for reality.

He knows nothing about love. He has been prevented from the very beginning from knowing what love is. He has been diverted into something else which is not love, which is only a game – artificial, a hypocrisy. You can pretend, but it is not going to nourish you. It is, on the contrary, going to exhaust you. It is going to take so much out of you because it is not a simple phenomenon.

To pretend continuously is a heavy job, perhaps the heaviest in the world. You can carry a mountain on your head – that will not be so heavy as carrying for your whole life, all kinds of lies, pretensions, false faces.

You become a mess just trying to keep all those faces, pretensions, lies, together. They are all falling apart; all are against each other, and they have no roots in reality. You have to feed them your own blood, your own heart, your own marrow. Naturally it creates a miserable world.
“But the priests are happy with the miserable world. They were very unhappy with pagans, so unhappy with pagans that the very word pagan became condemnatory.

One day I was talking to Vivek, just taking my tea. I said, ‘I am a pagan.’
She said, ‘Never use that word in the West.rsquo; I said, ‘Why? It is such a beautiful word.’ She said, ‘It may be beautiful for you, but Christianity, Judaism, the whole West, uses the word in a very derogatory sense.’ I said, ‘I was not aware of it. That means now I have to use it for myself. The word has to be freed from these criminals and their hands. They have destroyed a beautiful word.’

Once the pagan existed on the earth and he was as happy as any other animal; he knew nothing of misery. He loved, he lived, never bothering about ultimate questions and problems. He enjoyed eating, drinking – the simple things of life, not making everything a problem. The pagans have disappeared from the world. Religions destroyed them everywhere, all over the world.

He says, ‘Between birth and death, it is so much just to live. First let me finish this – don’t bring in unnecessary things to waste my time. Right now I am in the middle of life, let me live it. When I am in death I will try to live it too, but why should I bother about death now? – because I don’t remember ever bothering about life before. Right now life is in my hands, and I want to squeeze the whole juice out of it.’

I am reminded of a beautiful story; it is so beautiful that one wants.… It would have been good if it was true too; but it is very close to truth.” Osho

Previous: From Medication to Meditation
Next: From Personality to Individuality