“Sannyas is a rebellion against both the past and the future. Man has either lived in the past or in the future, but never in the present. And the present is the only reality there is; nothing else exists. “

“Existence knows only one time that is now and one space that is here. But mind either lives in the past which is no more or in the future which is not yet. Mind exists in the non-existential, hence mind never comes across the reality; it cannot come by its very functioning.” Osho 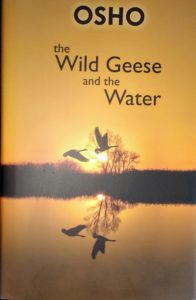 Het boek “The Wild Geese and the Water” is verkrijgbaar via internet.

The Wild Geese and the Water ENGELS

There is a Zen saying:
The wild geese do not intend
to cast their reflections.
The water has no mind
to receive their image.
In this volume of questions and answers Osho speaks about the art of meditation, to “be meditative, but be in the world.” He is asked about the difference between pleasure and bliss, whether there are any meaningless coincidences, and does an enlightened man dance? This book is simply an invitation

to yourself. You are only what you are, and it is perfect.
“When the wild geese fly, the water reflects them. The reflection is there, the image is there but the water has no mind to reflect and the wild geese do not hanker to be reflected either.”

Osho uses poetic image as a metaphor of how to live in the material world while maintaining a reflective awareness. And he urges us to use our everyday experiences in the ordinary world for our transformation.
In these talks given to an audience of people interested in meditation and inner experience, Osho gives us an enlightened vision of taking responsibility for our religiousness – and the joy of living our true and unique individuality.

Excerpt from: The Wild Geese and the Water, Chapter 1, about sannyas

“Sannyas is a rebellion against both the past and the future. Man has either lived in the past or in the future, but never in the present. And the present is the only reality there is; nothing else exists. 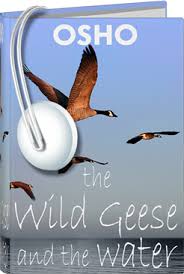 Existence knows only one time that is now and one space that is here. But mind either lives in the past which is no more or in the future which is not yet. Mind exists in the non-existential, hence mind never comes across the reality; it cannot come by its very functioning.” Osho

“Sannyas is a rebellion against mind itself. It is a way of life in which mind is not the master, no-mind is the master and mind functions only as a servant. Mind actually is a mechanism; it is good as a beautiful device of nature, but the moment the servant becomes the master there is danger, great danger. Then your life is bound to be a mess, a chaos. The servant is blind, unintelligent, unaware. To live according to the mind is not to live at all; it is sheer stupidity. Mind is never original, never intelligent; it is always repetitive, it is always borrowed, it is always mechanical hence stupid, hence unintelligent. ” The Wild Geese and the Water

Sannyas is a Jump ito Reality

“Sannyas is a tremendous jump into reality, an escape to reality from the unreal.There have been societies whose golden age was in the past, for example Indian society: its golden age has passed. It believes that the future is going to be darker and darker every day – there is no hope. Hence the Indian society lives in a state of depression, hopelessness, with no possibility of any change for the better. It lives in misery, poverty, sickness. But because of the idea that the golden age has already passed long before, thousands of years before, and we are falling by and by, every day, it does not believe in evolution, it believes in involution, it believes in regression. It is a regressive philosophy, not progressive.
“The West lives in the future; its golden age has yet to come: the classless society, the crescendo of communism, the world of equality and freedom, the stateless state. Those golden days are ahead, far away.
“In a way, both are the same. If one has to choose between the two then I will suggest: choose a progressive stupidity rather than a regressive one – if that is the only choice! At least with the progressive stupidity you have some hope, you will have some thrill, you will have some excitement; you will work for a better future. It is not going to come ever, but at least you will be occupied with beautiful dreams. It has never been there before, it is not going to be ever in the future. It is now! It is already the case! The Wild Geese and the Water

“Adam and Eve have never been expelled from the garden of Eden! That is my declaration, my message. That whole story is invented by the priests. Adam and Eve are still living in the garden of Eden – just they have eaten the fruit of knowledge. And who has given them the fruit of knowledge? It is not the serpent; it is the priest, it is the theologian, it is the philosopher. The fruit of knowledge does not grow on trees! It grows in churches, in temples, in the universities. It carries degrees – Ph.D’s, D.Litt’s, D.D’s –and it comes in all shapes and all sizes.
“There is the Hindu world of knowledge, the Mohammedan world of knowledge, the Christian world of knowledge. You can choose your own fruit, you can shop for it. It is available to everybody’s requirement, according to everybody’s needs.
“The misery that has happened to man is not because he has lost the original paradise; he is still there, but he has fallen asleep. And in his dreams he has become a Hindu, a Mohammedan, a Christian, a Jew, and what-not… a theist, an atheist, a communist, a socialist, a fascist. In his dreams only he has lost track of the paradise. And to dream simply means to live either in the memories –that is the past – or to live in the fantasies – that is the future.” Osho

Previous: THE WHITE LOTUS
Next: The Wisdom of the Sands