Live is to Live

Life is to live, not to discuss.
Live as deeply and intensely as possible. 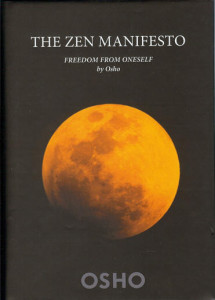 Het boek ‘The Zen Manifesto’ is tamelijk zeldzaam. Mogelijk is het tweedehands te verkrijgen via de Boekhandel of via internet.

Sex was a Taboo

You are asking, “Apparently sex was used by some Zen masters — for example, Ikkyu — as a way to transform energy. However, in no translation to date does evidence of this appear.”
That does not mean that sex was a taboo. It was so natural that there was no need to discuss it. You don’t discuss urination. That does not mean you have stopped urinating. You start discussing things only when you start going against nature. If you are natural, there is nothing to discuss.

Life is to live, not to discuss.
Live as deeply and intensely as possible.

Ikkyu is certainly known to have used Tantra as a way of transformation. The sexual energy is nothing but your very life energy, it is only the name. You can call it sex energy, but by your labeling it `sex’, it does not become different, it is life energy. And it is better to call it life energy, because that is a wider term, more inclusive, more comprehensive.
When you are going deeper into your center, that experience can be explained in many ways. It can be explained the way Hindus have explained it: it is realization of the ultimate, brahmabodh. But Brahma is not a person. The word is dangerous; it gives an idea as if we are talking about a person. Brahma is simply the whole energy of the existence.
Jainas will call it self-realization, atmabodh, but their self is not synonymous with the ego. It is synonymous with Brahma. You are no more — in your self-realization you are no more. ‘The Zen Manifesto’

I can see Mahavira’s compassion in it, but I also can see Buddha’s truthfulness. He says, “If it is really no-self realization, then call it what it is. Don’t deceive people.” ‘The Zen Manifesto’

Tantra will call it samadhi. ‘The Zen Manifesto’

The names are different, but it is exactly life, pure life without any contamination. Once you reach to your center you can think in different categories. You can use the yoga method, then you can say this is the very center of your being: sambodhi. You can use the Tantra method, then you can say this is the center of your sex energy. And sex energy in Tantra is equivalent to life energy. These words have unnecessarily kept people discussing and discussing.
The reality is one. It is better to experience it.
Zen masters don’t talk about it for the simple reason Zen is a very natural phenomenon. It is not anti-life, it is not escapist. But most of the Zen masters have left their household life. Tired, seeing no point in the marketplace, they moved to the mountains. It was not against the marketplace, it was simply that the mountains were more silent, more peaceful. They allowed you to be yourself without any interference.

Sex is not mentioned in the records, for the simple reason that there is no reason to record it, it is accepted. If one has lived it, and there comes a time when you have outgrown it, then there is no point to go on and on, tired and disgusted. While it is beautiful, enjoy, and when it becomes a tiring, disgusting phenomenon, then just leave it for others. But there is no reason to condemn it.

The Repressive Mentality forces you to think of Sex

It is the inhibition, the repressive mentality, that goes on forcing you to think of sex, because you have never lived it. Your Christianity, your Jainism, did not allow it, or allowed it and then created guilt in you that you were doing something which should not be done. Then you are living halfheartedly. And when a thing is lived halfheartedly you never transcend, you never go beyond it.
Dance to the moment when you stop automatically.
Live everything in life so you can transcend joyfully without any guilt. That is difficult for people who have

Sex and death are the two points: one is the beginning, the other is the end. People are kept unaware of both. About sex, it is dirty; about death, it is dangerous and gloomy… don’t talk about it. It is always somebody else who dies, don’t be worried. But in reality, you are born out of sex, and you are going to die. That which is born out of sex is going to disappear in death. Sex and death are the two points of the same energy. That which appears in sex, disappears in death. And both have to be understood, because both are the most important points in your life, and both have to be accepted and lived.

But religions like Christianity and Jainism are very repressive. Their very repression makes people guilty, sinners. They cannot live their life with totality, intensity, and they cannot meditate, because meditation’s first condition is to be total, to be total in everything. Then everything becomes meditation. Even making love, if you are total, then it becomes a meditation.
My own understanding about meditation is that in the beginning it must have happened to someone while making love, because that seems to be the only thing in which you can come to such a totality that time stops, mind stops, and everything becomes absolutely silent.
But that silence can be created by meditation also. The secret is known through sex, that if there is no time and no mind, you have entered into the ultimate. Through sex you enter for a single moment, and you fall back into the temporary. Through meditation you can remain in the ultimate, twenty-four hours around the clock, in an orgasmic joy. Your every moment becomes a dance.

Osho, The Zen Manifesto, Freedom from oneself