The Buddha has said… 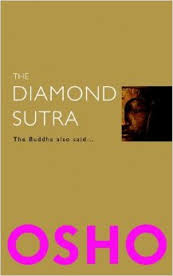 Het boek The Diamond Sutra is verkrijgbaar bij de Boekhandel of via internet.

The Diamond Sutra will appear to most of you as absurd, as mad. It is irrational but not anti-rational. It is something beyond the reason, that’s why it is so difficult to express it in words.
Once a whisky-drinking, chainsmoking and popcorn-munching American priest was staying with me. Roaming in my library, accidentally he found The Diamond Sutra. For just ten to fifteen minutes he looked into it here and there, then he came to me and said, “This man Buddha must have been mad. And not only

was he mad, he had mad followers too.’
I can understand his statement. Buddha will look mad to you too, because he is trying to say that which cannot be said. He is trying to catch hold of something which is essentially elusive. Hence all these strange sayings — they ARE strange. They are strange because the way they are put, the way they are expressed, is not logical. It does not make any sense, not at least on the surface.
And if you have not felt something of the beyond, it is very difficult for you to understand what Buddha is trying to do. We can understand only that which we have experienced, if not in toto then at least in part. Otherwise our understanding remains rooted in our experience.
It happened:
Charlie had been to school that morning for the first time. When he came home his mother said, “Well, Charlie, how do you like school?”
“I like it well enough, but I have not got my present yet.”
“Your present?” queried the mother. “What do you mean?”
“Teacher said, when she saw me, ‘You may sit here for the present, little man.’ I sat there all morning and didn’t get a thing!”

Now, a small child’s understanding is a small child’s understanding. And that’s how you are — small children as far as Buddha is concerned, as far as his statements are concerned. His statements are of the ultimate experience. You will have to be very very patient, only then something will start dawning in your consciousness. They are of utter significance. Even if a single statement is understood, that will prove radical, that will change you from your very roots.

A father took his young son to an opera for the first time. The conductor started waving the baton and the soprano began her aria. The boy watched everything intently and finally asked, “Why is he hitting her with his stick?”
“He is not hitting her with the stick,” the father explained.
“Then why is she screaming?”
In your mind many times these ideas will come: What is Buddha saying? It looks so utterly mad, it doesn’t make sense. It is beyond sense. You will have to gather yourself together to climb to something higher than you. You will have to stretch your hands towards the beyond. Even if you can touch just a fragment of these sayings, your life will not be the same again.
But it is difficult. We live rooted in the earth. We are like trees rooted in the earth. Buddha is a bird on his wings in the sky. Now these trees rooted in the earth are trying to understand the message of the bird who has no roots in the earth any more, who is flying in the sky, who knows the vastness, the infinity of the sky. He has a different understanding, a different vision. And the distance is immense.
Only very few can have a few glimpses of what Buddha is trying to do. Something of absolute value is being conveyed to you. If you cannot understand then remember that you cannot understand. Don’t say, like that whisky-drinking, chainsmoking, popcorn-munching priest, that Buddha is mad. Don’t say that, beware of that. It is easier to say that Buddha is mad. Then you are freed of the responsibility of understanding; then you can close The Diamond Sutra and forget all about it.
If you say, “It is beyond me,” then there is challenge. When you say, “Maybe I am very childish, juvenile. I cannot understand, I have to grow into my understanding. How can Buddha be mad?” then there is a challenge and you start growing.
Always remember that: never decide about the other. Even if Buddha is mad, take it as a challenge. You will not lose anything. If he is mad, then too you would have gone beyond your boundaries just in the effort to understand him. If he is not mad then you have met with something precious, then you have stumbled upon a great treasure.

Now look at the absurdity — but it is significant, it is very meaningful. What are the Dhammas of the Buddhas, the special characteristics of a Buddha? His special characteristic is that he has no characteristics, that he is utterly ordinary, that if you come across him you will not recognize him.
He is not a performer, he is not a politician, he is not an actor. He has no ego to perform. He is not there to convince anybody about his importance. He is utterly absent. That is his presence. That’s why these absurd statements.
His characteristic is that he lives as if he is dead; that he walks and yet nobody walks in him, that he talks yet nobody talks in him… there is utter silence, never broken.
Zen monks say Buddha never uttered a single word, and Buddha spoke for forty-five years continuously. If anybody can surpass him, that is me, nobody else can surpass him. And I say to you I have also not uttered a single word. Zen people are right. I agree with them with my own experience. I go on saying things to you and yet deep inside there is absolute silence, not disturbed by what I say. When I am speaking, the silence is there, not even a ripple arises in it.
I am here, in a way utterly present, in another way absolutely absent, because there is nothing arising in me which says ‘I’. Not that I don’t use the word; the word has to be used, it is utilitarian — but it connotes to no reality. It is just a utility, a convenience, a strategy of language; it corresponds to no reality.

from Osho, The Diamond Sutra

Previous: The Diamond Sword
Next: Dimensions Beyond the Known