A Way into the Mysteries of Sufism 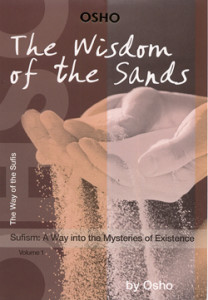 Het boek The Wisdom of the Sands is verkrijgbaar bij de Boekhandel of via internet.

Impressie van the Wisdom of the Sands

In this collection of his commentaries on Sufi stories, Osho describes one of the stories within as belonging to “the very foundation of religious consciousness.” Deceptively simple, these tales of the Sufis have a deeper underlying significance, as Osho makes manifest through his beautiful and insightful commentary. This book is not for those who want entertainment, but for those who seek illumination.

In The Wisdom of the Sands is het verhaal over MOJUD, het leven vaneen soefi mysticus opgenomen, lees meer

Excerpt from: The Wisdom of the Sands

“This belongs to the very foundation of religious consciousness. Without it there can be no religious transformation. So listen to this story as attentively as possible. Let this story sink into your being. This story can open a door, this story can become such a radical change in your life that you may never be the same again. But the story has to be understood very minutely, very carefully, very lovingly, because it is a strange tale.

“It is very easy to be entertained by such stories, but that is not their purpose. You miss the point. They are reflections of the beyond. They say that which cannot be said and they try to express that which is inexpressible. They are not about ordinary life, they are not about the mundane world. They belong to the innermost search for truth, they belong to the center of your being. They are beautiful devices. If you simply pay attention, if you meditate on the story, parallel to the story something else will start revealing itself in your being. The story is on one plane, but the revelation is on another plane, parallel to it. Unless you start tasting that parallel revelation, remember, you have missed the point. And to miss the point is very easy. No intelligence is needed to miss the point; any stupid person can do it. But to understand, it will require great intelligence. So pull yourself together. Become integrated for these few moments. Listen as totally as possible, just become your ears. Be there. Something of immense value is being imparted in this story.” Osho, ‘The Wisdom of the Sands’

Previous: The Wild Geese and the Water
Next: Words from a Man of No Words