Finding Your Inner Power, Your Potential

Osho talks on the ten paintings that tell the famous Zen story of a farmer in search of his lost bull, providing an allegorical expression of the search for enlightenment.

“We enter on a rare pilgrimage. The Ten Bulls of Zen are something unique in the history of human consciousness. Truth has been expressed in many ways, and it has always been found that it remains unexpressed whatsoever you do. However you express it, it eludes – it is elusive.” Osho 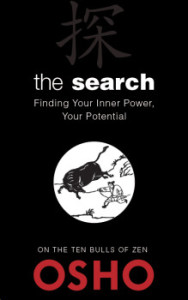 We hebben het in India niet over de Schepping, maar over Leela (= Spel).

The Search is verkrijgbaar bij de Boekhandel of via internet.

Finding Your Inner Power, Your Potential, on the Ten Bulls of Zen

Osho talks on the ten paintings that tell the famous Zen story of a farmer in search of his lost bull, providing an allegorical expression of the search for enlightenment.

“We enter on a rare pilgrimage. The Ten Bulls of Zen are something unique in the history of human consciousness. Truth has been expressed in many ways, and it has always been found that it remains unexpressed whatsoever you do. However you express it, it eludes – it is elusive.

It simply escapes description. The words that you use for it cannot contain it. And the moment you have expressed it in words, immediately you feel frustrated as if the essential has been left behind and only the nonessential has been expressed. The Ten Bulls of Zen has tried in a single effort to express the inexpressible.”

Ten Zen paintings that tell the famous story of a farmer in search of his lost bull are an allegory for everyone’s search for enlightenment. Originally Taoist, The Ten Bulls were repainted by the 12th century Chinese Zen master, Kakuan, and first appeared in the West in American author, Paul Reps’ book, Zen Flesh, Zen Bones. These discourses are Osho’s commentaries on the paintings. Osho retells these deceptively simple stories with great charm and wisdom while exploring the deeper layers of meaning behind each picture. In many traditions, the tenth picture showing the farmer returning to the marketplace with a bottle of wine has been purposely omitted, whereas for Osho, this is a beautiful symbol of how we can truly celebrate life in the world once we are filled with inner richness and truth. This is his vision of the new man, whom he calls Zorba the Buddha, whose feet are firmly on the ground, yet whose hands can touch the stars.

So the first thing:
I am for life, all for life, and all for enjoyment. I am not for somber seriousness, I am not for sadness. I am against all those religions which go on teaching people to be serious. God is not serious; otherwise flowers won’t exist. God is not serious; otherwise birds won’t be able to sing. God is tremendously in fun — that’s why we say in India that the creation is not a creation in fact but a play, a leela.

Loving life, one day you love God. Living life, one day you live God.
So don’t be halfhearted. Be totally in life. And I am not here to distract you from your life. It has already been done. The whole of humanity is suffering because of that. Religions have proved a calamity because they tried to make goals opposite to life, diametrically opposite to life.” The Search

“Kakuan first tried the unconscious language because that is the deepest: he painted these ten bulls. But he

felt dissatisfied. Then he wrote ten poems as a supplement, as an appendix. Poetry is mid-way between the unconscious and the conscious: a bridge, a misty land where things are not absolutely in the dark and are not absolutely in the light – just somewhere in the middle. That’s why where prose fails, poetry can indicate. Prose is too superficial; poetry goes deeper. Poetry is more indirect but more meaningful, richer.

But still Kakuan felt dissatisfied, so he wrote prose commentaries.

Previous: Engelse Osho Boeken 9
Next: The Secret of the Secrets