Talks on the Nirvana Upanishad

Behind a Thousand Names, Talks on the Nirvana Upanishad: In these talks on one of the ancient Hindu Upanishad scriptures, the Nirvana Upanishad, the enlightened mystic Osho explores the essential nature of spiritual longing, the moving force behind every seeker’s quest for truth – truth beyond the many names we call it and claim to know it by.

Speaking at a mediation camp in Mount Abu, Rajasthan, in India, Osho elucidates the enduring wisdom of this ancient teaching: the true meaning of initiation, or sannyas; the qualities needed by the seeker that will allow him to flower to his full potential; the dangers and pitfalls along the way; the harmonious dance between devotion, the path of love, and discipline, the path of meditation. Through the medium of this Upanishad, Osho shares with us the very fragrance of self-realization, the vision of nirvana.

On The Nirvana Upanishad.

Osho says: “The sutra that we are exploring is so revolutionary that perhaps this is why no commentaries have ever been written on the Nirvana Upanishad. It is one of the neglected ones. …This one is really revolutionary.”

Talks on the Nirvana Upanishad

EXCERPT OF BEHIND A THOUSAND NAMES

“Actually, truth has no name, and that is why it can be given thousands of names.

“Remember, if it had one name it could not be called by thousands of names. Because it has no name, it can be called by any name. But human beings, in different languages, in different times and through different experiences, have given it many, many names. They all point to the same thing, though the words are different.” Osho

Awareness is the sannyasin’s protection;
Compassion is his only play;
Bliss is his mala – his bead necklace;
The aloneness of the inner cave is his posture;
Unwavering joy is his only dialogue.
Unplanned are his alms,
He behaves like the swan.

His only teaching: the soul residing within every living being is the true swan.

There are two qualities of a hansa, a swan. It will be good to understand them, because they are also qualities of a sannyasin. First, I spoke to you of the mythical ability of the swan to separate milk from water. This may not be based on scientific fact, but nevertheless it is a metaphor for the swan’s ability to separate the essential from the non-essential. The awakened, discriminating intelligence of the sannyasin separates, as if with a sword, the essential from the non-essential

Second, the mythical swan is said to eat only pearls, nothing else. It may die, but it will only eat pearls In this same way the sannyasin chooses only the divine, never the material. In any circumstance he chooses the pearls, not the stones. He will be ready to die rather than accept stones. His choice is for the highest His choice is only for the good, the beautiful, the true. These qualities of the swan are the behavior of a sannyasin.

His only teaching: the soul residing within
every living being is the true swan. (Behind A Thousand Names) 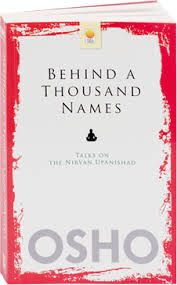 awakened one, the one who knows, and those who are asleep, is not a difference of their intrinsic nature, but of awareness.

One person has diamonds in his pocket but knows nothing about their existence; the other knows that he has diamonds in his pocket – the difference between them is not in their intrinsic wealth but in their awareness of it. One will remain a beggar because he does not know his wealth, the other will be rich because he knows his wealth – both have the same amount. But what value does wealth have for one who is not aware of it, who has no idea of its existential The treasure is of no value to one who does not know about it Of what value are those diamonds to you if you have thrown them into a corner, taking them to be mere stones? The difference is in the knowing. It is the understanding that is your wealth.

This is what the sages teach – in different forms, in different ways, every day – that whatsoever resides in them also resides in you. It is the same in everyone. Once the trust crystallizes that within you the same being resides, you may become ready to take the jump.

Once that remembrance dawns on you, then perhaps you will set out on the search. Then you may become ready for the journey If someone tells you that the treasure is hidden right in your house, underground, then you may lift the pick in your hand and begin to dig. You are a lazy man, you remain lying down, sleepy perhaps if someone reminds you of your treasure, you may get up If you dig for some time, perhaps then you may hear some echo of the treasure that lies hidden within. And if you go on a little more, perhaps you may find your treasure And if you break open those chests you will become the owner of your own treasure. This is what the sages teach -their every living breath is the longing to remind everyone that the paramhansa is hidden within every living being.
the today’s Meditation:

Now we will continue in the search for that treasure.

Just search a little for that great swan – is it within you, or is it not within you?

Notice and understand a few things before you begin.

Last night’s experiment went well, but there were two or three small mistakes. Let us see to it that they do not happen again tonight. One, those who want to just stand there, those who feel that they won’t be able to jump in – although it shouldn’t feel that way; you can jump a little, make some effort – but yet those who feel they will only be standing, please do not stand in front of me. Due to those people, the intensity of the people meditating around them is also hindered Those who do not totally participate should move to the back. Those who feel that no matter what they do they won’t be able to dance should stand at the back

In front of me and on both sides of me should be only those who are ready to jump and do it totally. Their jumping will become infectious, it will create waves; then perhaps those standing at the back can also gather some courage. Perhaps they too will get caught by the infection and join in. But those people should not be standing in front of me, because that creates a hindrance. If one person is standing, not doing anything, he spoils it for a circle of at least four or five people who are around him those who only want to stand, move to the back; it will be better.

Here, near me, should stand only those who have a total desire to enter their madness.

The second thing for thirty minutes you are to not blink your eyes, and focus them on me – no blinking at all. At the same time, you are to jump joyously and shout the sound ‘hu’ for the full thirty minutes

Now for two minutes, breathe vigorously so that the energy is aroused.

First breathe vigorously, then we will begin the experiment.  From: Osho, Behind a Thousand Names

Previous: The Beauty of the Human Soul
Next: Being in Love