“For millions of years our whole way of life has been of adjustment, of compromise. And compromise with whom? With a crowd–in which everybody else is also compromising, where nobody is opening up his reality, where everyone is afraid of being himself, because from the very beginning he has been told, “The way you are is not going to be acceptable.”

The World needs the Total Rebel

There have been great people in the world, but even the greatest of them are very small in comparison to the authentic rebel I am talking about because they all, in some way or other, compromise with the establishment. That’s where the rebel differs from them all.

They were wise, they were creative artists, they were musicians, dancers, all kinds of people – the past has created many luminous figures; but something is missing in them. The basic missing thing is they all lived in compromise with the vested interests. None was total in his rebelliousness. Yes, partial rebels have existed, but a partial rebel is not enough. Man needs total rebels to change the destiny of mankind from turning into a graveyard – to turn its direction toward the garden of Eden.” Osho, The Rebel.

“You have to be acceptable, and that means you have to live according to ideals, formalities, mannerisms. You have to be, more or less, an actor in a drama – and do your best. Never expose yourself, never be naked and nude. Hide yourself–first from others, and finally from yourself. Force yourself into such darkness that even you cannot see who you are.

A Handbook for the man of the Future: The Rebel

Here is a book for today, a much-needed declaration that for humans there is hope, there is a way forward! Osho offers a revolutionary

approach to the eternal quest that mankind carries within. As he says: “Life has intrinsic value, there is no goal outside it. Hence my whole effort is to change everything into playfulness. To me that is real spirituality.”
“Awake and claim your birthright. Religion is not anybody’s monopoly, it is everybody’s birthright. It has no name, no church, no organization. It is a sheer rebellion against all churches, all organizations, all scriptures. It is meeting existence directly and immediately, in innocence, in gratitude, in love, in a deep communion. This is the prayer I would like to spread all over the earth. Because this is the only prayer that can save it.” OSHO 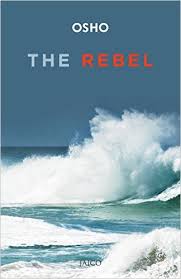 Het boek The Rebel is verkrijgbaar via de Boekhandel.

I am in a total jam. If I hide things, I am in trouble. When I stop hiding them, I’m in even bigger trouble. 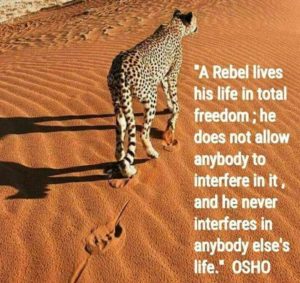 “It is not only with you, it is with everybody who has been brought up by a hypocritical society. Its whole training is to hide your original face, to wear masks–masks which are appealing to people, masks which are appreciated by people. And always remembering to adjust according to others people’s ideas.
“For millions of years our whole way of life has been of adjustment, of compromise. And compromise with whom? With a crowd–in which everybody else is also compromising, where nobody is opening up his reality, where everyone is afraid of being himself, because from the very beginning he has been told, “The way you are is not going to be acceptable.”
“You have to be acceptable, and that means you have to live according to ideals, formalities, mannerisms. You have to be, more or less, an actor in a drama – and do your best. Never expose yourself, never be naked and nude. Hide yourself–first from others, and finally from yourself. Force yourself into such darkness that even 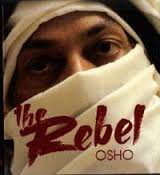 you cannot see who you are.
“Don’t take it as a personal problem; it is our social reality. It is the way we have been manufactured, modified, continuously painted, white-washed–according to others’ ideas. Just because those ideas are ancient and old, and because man has lived according to those ideas for centuries, it has been thought that they must be right; otherwise people would have rejected them long ago. The longer an ideal has lived, the more valuable it becomes. The more rotten it is, the deadlier it is, the more respectable, the more honorable it must be.
“It is difficult to fit with these ideals, it is arduous. It is a tremendous struggle against yourself, against nature, against existence, against life. But you have been told by your parents, by your teachers, by your priests, by everybody–and with good intentions– ‘Don’t assert yourself. Keep yourself out of the way, be a perfect hypocrite, and your life will be a successful life.’
“In short, it is ambition, success, a desire to fulfill the ego that has been used to force you into darkness. If you want success, if you want Nobel Prizes, if you want to be honored by the society, respected by the masses, then you have to do one thing absolutely: Never be yourself! Hide yourself, and just function according to the expectations of others.

“It is this very conditioning that I am absolutely against. I want you to be yourself. It may bring disrespect, it may take away your so-called success. You may become a nobody from being a very famous celebrity. But there will be tremendous satisfaction and contentment, and a great relaxation.

“Who cares, in the first place, to be crowned by idiots? It is an insult, it is not respectability.
“There is no point being worried about other people; their opinions mean nothing.
“The only thing that matters in life is your own opinion about yourself, your own respect for yourself. Nobody can destroy your dignity then, because it is not dependent on anybody’s opinion. “Come out in the open–even if it goes against the whole world. Enjoy your original being.
“To me, that’s what rebellion is, that’s what religion is.” Oho, The Rebel

Previous: Rebellion Revolution and Religiousness
Next: The Rebellious Spirit