Yoga the Science of the Soul: the Heart of Yoga 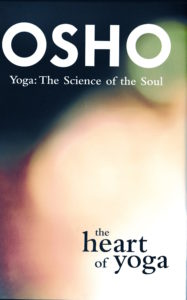 Het boek ‘Yoga the Science of the Soul’ is in herdruk uitgekomen. Het is  verkrijgbaar  via internet als audiobook.

Excerpt of Yoga the Science of the Soul: the Heart of Yoga # 1

“Try to understand his every word. It will be difficult; it will be difficult because his terms will be those of logic, reasoning, but his indication is towards love, towards ecstasy, towards God. His terminology is that of the man who works in a scientific lab, but his lab is of the inner being. So don’t be misguided by his terminology, and retain the feeling that he is a mathematician of the ultimate poetry. He is a paradox, but he never uses paradoxical language – he cannot. He retains a very firm logical background. He analyzes, dissects, but his aim is synthesis. He analyzes only to synthesize.

“We will be moving on a dangerous terrain. If you forget that he is a poet also, you will be misguided. Then you become too much attached to his terminology, language, reasoning, and you forget his goal. He wants you to go beyond reasoning, but through reasoning. That is a possibility. You can exhaust reasoning so deeply that you transcend. You go through reasoning; you don’t avoid it. You use reason to go beyond it as a step. Now listen to his words. Each word has to be analyzed.” Osho

Impressie van Yoga the Science of the Soul

Yoga is not a religion-yoga is pure science just like mathematics, physics, or chemistry What survives of yoga today are mostly the physical exercises that have helped people to achieve a more relaxed and balanced state in their lives. But in fact, as Osho explains in this book, the postures did not come first; rather, people began to notice that whenever they were in a state of meditation, the body naturally took on certain postures.

Because body and mind are so intimately connected, it is possible to bring a certain peace to the mind by arranging the body in a posture that corresponds to this peace. But it’s a misunderstanding to think that it’s the cart that pulls the horse. Drawing from yoga’s original teachings, Osho clarifies this mind-body relationship and reveals yoga to be not only a set of physical exercises but what he calls a “science of the soul”
A handbook with an invaluable resource for either beginning or experienced yoga practitioners, and for anyone who seeks better understanding the intricate and powerful relationship that exists between body and mind.

NOW THE DISCIPLINE OF YOGA.
YOGA IS THE CESSATION OF MIND.

THEN THE WITNESS IS ESTABLISHED IN ITSELF.
IN THE OTHER STATES THERE IS IDENTIFICATION WITH THE MODIFICATIONS OF THE MIND.

We live in a deep illusion – the illusion of hope, of future, of tomorrow. As man is, man cannot exist without self-deceptions. Nietzsche says somewhere that man cannot live with the true: he needs dreams, he needs illusions, he needs lies to exist. And Nietzsche is true. As man is he cannot exist with the truth. This has to be understood very deeply because without understanding it, there can be no entry into the inquiry which is called yoga. ‘Yoga the Science of the Soul’

Now scientists say that a man can live without sleep, but he cannot live without dreams. In old days it was understood that sleep is a necessity, but now modern research says sleep is not really a necessity. Sleep is needed only so that you can dream. Dream is the necessity. If you are not allowed to dream and allowed to sleep, you will not feel in the morning fresh, alive. You will feel tired, as if you have not been able to sleep at all. ‘Yoga the Science of the Soul’

In the night there are periods – periods for deep sleep and periods for dreaming. There is a rhythm – just like day and night, there is a rhythm. In the beginning you fall into deep sleep for nearabout forty, forty-five minutes. Then the dream phase comes in, then you dream. Then again dreamless sleep, then again dreaming. The whole night this goes on. If your sleep is disturbed while you are deeply asleep without dreaming, in the morning you will not feel that you have missed anything. But while you are dreaming, if your dream is disturbed then in the morning you will feel completely tired and exhausted.

Now this can be known from the outside. If someone is sleeping you can judge whether he is dreaming or asleep. If he is dreaming, his eyes will be moving continuously – as if he is seeing something with closed eyes. When he is fast asleep, eyes will not move; they will remain steady. So while your eyes are moving, if your sleep is disturbed in the morning you will feel tired. While your eyes are not moving, sleep can be disturbed, in the morning you will not feel anything missing.

Many researchers have proved that human mind feeds on dreams, dream is a necessity, and dream is total autodeception. And this is not only so in the night: while awake also the same pattern follows; even in the day you can notice. Sometimes there will be dream floating in the mind, sometimes there will be no dreams.
When there are dreams you will be doing something, but you will be absent. Inside you are occupied. For example, you are here. If your mind is passing through a dream state, you will listen to me without listening at all, because your mind will be occupied within. If you are not in a dreaming state, only then you can listen to me.

Previous: Yoga the Alpha and the Omega
Next: Yoga the Mystery beyond Mind