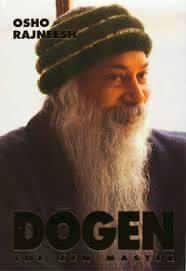 This book of talks on stories from the life of Zen master, Dogen, is dedicated to the full moons. Not only is the moon a symbol for the mirror of our consciousness in the Zen tradition, but it is also a transforming agent.
“The master is the possibility for this transformation…the universe our university.”

Enlightenment is so light, so loving, so peaceful

From Dogen the Zen Master: “I want you to understand: enlightenment is so light, so loving, so peaceful – just like laughter. The theologians have made it so heavy, so burdensome, that people ignore it. Enlightenment should also be entertainment at the same time. ” Osho 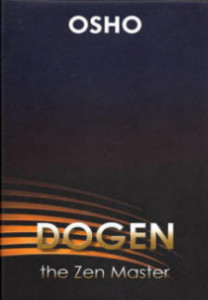 The running theme of Dogen′s message of 800 years is the eternity of our consciousness, a consciousness with no limitations and that exists through all changes of form. Eternity turns around everything; it is our inner movement beyond form, birth, death, beyond life, which simply is – isness.

The Eastern mysticism, of which Zen is just the ultimate peak, accepts the reality of your inner self which you cannot see, cannot understand, but which you are. You can be awakened to it or you can remain asleep, it makes no difference to the inner quality of your being. That is your ultimate reality.

Then there is the body, which is only an appearance – an appearance in the sense that it is changing constantly. You see a beautiful woman or a beautiful man and they are already becoming old. The moment you rejoice in the beauty of a rose, the time for it to disappear back into the earth is not far away. This kind of reality has also its place in the Eastern vision. They call it appearance, moment to moment changing. There is a time to be born and there is a time to die. The seasons will come again, and the flowers will blossom again. It is the round trip of existence in which – except your being, your center – everything goes on changing. This changing world is a relative reality.

And then there are other realities – like dreams. You know they are not, but still you see them. Not only do you see them, they affect you. If you have a nightmare and you wake up, you will see your heart is beating harder, your breath is changed by the nightmare. You may be even perspiring out of fear. You cannot say that the nightmare is not there; otherwise from where has this perspiration come, and this changed heartbeat and breathing?

Eastern mysticism accepts this third layer of reality: the dream, the horizon that you see all around, which exists nowhere … but you can see it from anywhere.

And the whole effort of Zen, or any meditative method, is to bring you closer to that which never changes, that which is always. It knows no time …. If there is no change, how can there be past, future, present? The world that knows past, future and present can only be relatively real – today it is there, tomorrow it is gone. The body you had believed in so much one day dies. The mind you had believed in so much does not follow you, it dies with the body. It has been a part of the body mechanism.

That which flies out of the body in death is an invisible bird flying into an invisible sky. But if you are aware you will be dancing, because for the first time you will have known what freedom is. It is not a political freedom or an economic freedom; it is a more fundamental, existential freedom. And anything that grows out of this freedom is beautiful, graceful. Your eyes are the same, but their vision has changed. Your love is there but it is no more lust, it is no more possessiveness. It transforms itself into compassion.

You still share your joy in your songs, in your dances, in your poetry, in your music – but just for their sheer joy.