Answers to the Seekers on the Path

“Truth never changes, but statements have to change because the statement depends on the audience. I am not talking to the walls; if I were there would be no need to change the statement. I am talking to people who are conditioned and programmed. It is a very skillful work to decondition them, to deprogram them, to create a trust, a friendship, a love stronger than your conditioning – so that if a moment comes that you have to choose between your conditioning and the love, you will choose love.”

“Now I have people who are ready to listen to the truth without any Jesus, any Krishna, any Buddha. I can now talk directly to you. These three and a half years of silence were simply a device to give a gap so that you could forget all that I have said before, and I could start afresh.” 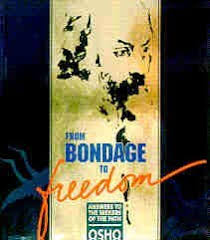 FROM BONDAGE TO FREEDOM 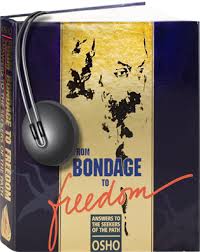 The Book ‘From Bondage to Freedom’ is a deeply moving account of a rare and provocative experiment in human growth, these are Osho′s last discourses given in the US. While most of his people are experiencing the fruition of their efforts to manifest a living community based on Osho′s vision, a small, power-motivated group′s secret attempts to take control of the commune, poison Osho and his doctor is revealed as they flee the country.
Through it all, Osho answers the questions of disciples and friends devastated and confused by the wanton disregard of the few corrupted people. His answers expose the truth with uncompromising compassion as he talks on fascism, power games and individual responsibility. As always Osho indicates how absolutely everything can be used by the seeker to wake up and be more aware.

I HAVE TO START WTH CONDITIONED PEOPLE

Osho,
Once you said Jesus was fully enlightened. Recently, I heard you say Jesus was not enlightened. You tell us that you always say the truth. How can truth change so fast?

Truth never changes, but statements about truth can change. When we start teaching a child, his book is full of big pictures and very little written matter. If he is learning the alphabet, then every letter stands for something. M stands for mango. The child can understand the mango, not the M, and he can see the mango – a colorful, beautiful picture. But slowly slowly the mango will be dropped. Now when you read, have you to repeat every time, “M stands for mango”? You have completely forgotten what stands for what. Now you can read the alphabet directly.

Yes, I had said to you, “Jesus is enlightened.” It was “M stands for mango,” because you were not in a state to understand that Jesus is not enlightened. To say to you something which you cannot comprehend is meaningless. For centuries you have become accustomed to believe that Jesus is the only begotten son of God: he is light, he is love, he is life, he is the savior – twenty centuries of conditioning.

Now you can understand my problem. I have to start with conditioned people, programmed people. Their conditioning is thick; I have to go with them so that they can go with me!

EXCERPT FROM BONDAGE TO FREEDOM

“Life is fragile. The higher you go, the more fragile. The tree is not so fragile as the flower. The fragrance is even more fragile than the flower – just a small breeze can take it away.
“This is true, that you see innocence and lovingness all over the place in this commune. Naturally, the question has arisen in your mind that why did something like a fascist calamity happen to you?
“Innocence can be taken advantage of. Lovingness can be exploited.
“But no harm has been done to you! Fragrance may be fragile; it may exist only for a moment, but that moment is eternity. The rock may exist for eternity, but that eternity is not even equal to a single moment of fragrance.
“The people who tried to exploit your innocence and love, your trust, have not destroyed you; they have destroyed themselves.
“This is the beauty of the power of love, the power of trust, the power of innocence.
“What harm has been done to you? No harm can be done to you. Even if you are killed, your loving being and your trusting being and your inner innocence are eternal. And you have seen the whole drama, that the people who were powerful but in the service of destructiveness had to escape finally. Love is victorious.” Osho

“Love is not a child’s play; it goes deep into the heart, and there is no way to get rid of it.” Osho

Previous: Meditation the Only Way & Freedom From The Past
Next: Engelse Osho Boeken 5