the Difference between the Buddha Mind and the Ordinary Mind’

Osho’s very profound and clear insight about ’the Difference between the Buddha Mind and the Ordinary Mind’
“The difference between a buddha mind and an ordinary mind; An ordinary mind is an active agent. It is not like a mirror. It is not just showing whatsoever is the case; no, it penetrates ACTIVELY. It brings its own ideas to reality. It colors reality, it gives a shape. It gives a form to reality which is not there, which has been brought by the mind itself.
The flower is there; the mind says, ”Beautiful.” Only the flower is there – nothing of beauty, nothing of ugliness. The mountains are there. Nothing beautiful, nothing ugly; they simply are there. Existence simply is. It is not divided. Mind brings its knowledge, divides it, and then you go on and on, and you never become aware that a subtle wall surrounds you. Because of that wall you are unable to penetrate reality. One has to become passive. Remember: alert, but passive – that is my definition of meditation. Alert but passive.
Just the other day somebody sent me a small cartoon. I loved it. Two men are standing – maybe neighbors, friends – and one says to the other, ”I hear that your son has started meditating.”
The other says, ”Yes, he has started meditating. And I think it is far better than just sitting and doing nothing.”
But that is the meaning of meditation! – just sitting and doing nothing. If you DO, it is not meditation.” Osho, Just Like That, Talks on Sufi Stories, Ch. # 5. Mind games 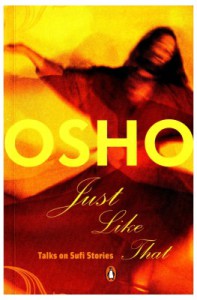 Het boek ‘Just like That’ is niet gemakkelijk verkrijgbaar. Mogelijk tweedehands via de Boekhandel of via internet.

“Self-encounter is a suffering in the beginning, painful, deeply painful; it hurts, and hurts like hell. But only through suffering bliss is achieved; there is no other way. One who has passed through all sufferings becomes capable of the ultimate ecstasy – what Abraham Maslow and the humanistic psychologists call the “Aha!”experience.

“When you have passed through a suffering it is like a long journey. Journey-tired you come, you cannot even move, and suddenly you see the goal – and your whole being feels: Aha! – an ecstasy, and all suffering disappears. And you are in a totally different dimension.

“Self-encounter is the deepest suffering in the world; that’s why you are avoiding it. Socrates goes on saying: Know thyself – but nobody listens, because to know thyself means to know thyself as suffering. Of course, bliss follows, but that is not in the beginning, that is in the end. The beginning is painful. It is like a birth. Birth is painful. 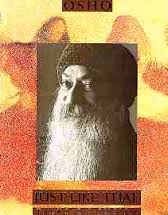 remain for millions of years.

“And you are the same seed. Wherever you are, in the cave of China or in the cave of New York, it makes no difference: you have been a seed for millions of lives. You have been afraid to take the jump and become a plant. It is a great jump. It is a risk. The shell is torn asunder, the protection lost; the security disappears.

“The tender plant comes out, so delicate, so tender, and such a difficult world! – where all sorts of hazards exist. Animals are there, and children are there – and nobody knows what will happen. And the plant is so tender, so soft, so feminine, and the seed was so masculine, so protective, so hard, so strong. And life is soft, death is hard. Life is tender…. For death there exists no hazard, because a dead person cannot die again. For life – millions of hazards. Hazards and hazards – it is an adventure into the unknown.

“Watch a seed sprouting, breaking the hard shell, then the hard crust of the earth, then rising into the world – the unknown, unmapped, uncharted future. Nobody knows what is going to happen and all sorts of danger all around. If the plant becomes afraid and remains in the seed, then it will never taste what life is.

Previous: Joy
Next: Keys to a New Life