Talks on Pythagoras the Philosopher and the Mystic

In this book are talks on the Greek mathematician and mystic, Pythagoras. Osho declares that, had Pythagoras been listened to, humanity’s history would have been totally different.
Pythagoras is a man close to Osho’s heart, with his understanding that materialism and spirituality – East and West, body and soul – exist together.

Pythagoras understood that these are not opposing  forces but complementary facets of a harmonious whole. In this series of talks Osho delves into the insightful verses of Pythagoras and responds to seeker’s questions. 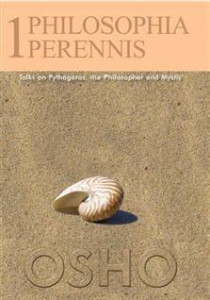 Philosophia Perennis I is verkrijgbaar in de Boekhandel.

Impression of Philosophia Perennis I

Question: “I have tried my whole life to change myself; but it seems nothing ever changes — I remain the same. Is not there any hope for me?”Philosophia Perennis I 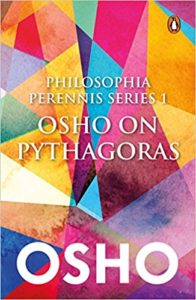 “In the first place why do you want to change yourself?
You are beautiful as you are — why can’t you accept yourself? And the miracle is: when you accept yourself, the change happens. It can’t happen by your effort, because WHO will change you? The same mind trying to change itself? The violent mind trying to be non violent? How is it going to happen? Even in being non-violent there will remain violence.
The angry mind trying not to be in anger? You can manage, you can cultivate a hardness around you. You can repress the anger, but it is the same mind — anger is there. You are sitting on top of it; you are sitting on a volcano.

Acceptance is a Magic Key

The stupid mind trying to be intelligent? In the very effort, stupidity will become more and more ingrained….
Then what is the way out? The way out is acceptance — acceptance is a magic key. Accept yourself as you are! And in that acceptance, intelligence arises. In that acceptance, why does intelligence arise? Because whenever you accept, you are no more divided; the split disappears. The split is between you and the should, between you and the ought. That is where the whole secret of schizophrenia is rooted: “I am this and I have to be that.” ‘Philosophia Perennis I’

The Split Will Become Deeper

So now there are only two things: either drive yourself crazy in becoming that… and it will be just like a dog trying to catch its own tail, or like pulling yourself up by your own shoestrings. You can hop a little, jump a little, but that will not do much. That’s what your so-called religious people go on doing: hopping, pulling themselves up by their own shoe-strings. For a moment they are a little higher than the earth, but back they come — and with a bang.
This is not the way. The split will become even deeper. The more you try, the more you will fail. And the more you fail, the more you will lose your self-confidence, your respect for yourself — in drugs, in alcohol, in this and that, in power politics, in money, in the marketplace… and people have invented a thousand and one ways to escape from themselves. And they have to invent them because they have created an ugly idea of themselves. To tell them “Know thyself!” is to shock them. They don’t want to know themselves.
So people like Socrates go on saying “Know thyself” — nobody hears, nobody listens.

Nobody wants to know himself

Nobody wants to know himself — because you have already decided that you are a nauseous being, that you are sick, that you are ugly, abnormal, that all kinds of pus and wounds are there inside you. Who wants to go there? It is better not to look at those wounds; forget all about them.
And if you try to change, what will you do? You will prune this branch, that branch. And the problem is in the roots, not in the branches. If you prune a tree, the tree will become thicker . It will have better foliage; more leaves will grow, because the tree will take the challenge. You want to destroy the tree? You cut one leaf: three leaves will come — that is the answer of the tree. Cut one branch: three branches replace it. The tree cannot so easily be defeated. It has to survive. And you can go on cutting the leaves and branches — nothing will happen.

DEEP DOWN YOU WILL REMAIN THE SAME, BECAUSE THE ROOTS ARE INTACT

So the first thing is not the effort to change — the first thing is the effort to acquaint yourself with your own being: who is residing in you? Look at this guest who has come to you. Your body is a host… some stranger is residing in the body, some stranger from the beyond has descended in the body. That is you! Just look, watch, meditate, be aware of it. Drop ALL efforts to change yourself! Put your whole energy into knowing yourself, and out of that knowing comes growth. And that growth will bring your original face. You have to be only yourself. You have to be only that which you already are.” Osho, ‘Philosophia Perennis I’

Summary of Philosophia Perennis I

In Philosophia Perennis, series 1, the perennial philosophy, the timeless laws of existence-Osho speaks on the ancient but little-known teachings of Pythagoras, his Golden Verses. Pythagoras’ name is primarily associated with mathematics, but here we have a different picture: Pythagoras as the explorer of inner consciousness as well as of the outer world; a synthesis between the rational West and the mystic East, who taught both religion and science in his mystery school.

Not only does Osho introduce the reader to the wisdom of Pythagoras, he also includes a discourse on the two laws of Pythagoras-necessity and power. Osho brings his insight to topics such as politics, love and meditation, obedience and surrender.

Previous: Pharmacy for the Soul
Next: Philosophia Perennis II