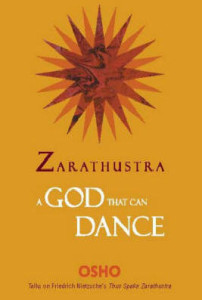 ‘Zarathustra a God that can Dance’ is verkrijgbaar bij de Boekhandel.

Impressie van ‘Zarathustra a God that can Dance’

In this commentary on Friedrich Nietzsche’s Thus Spake Zarathustra, Osho unravels the mystery of man’s three metamorphoses – from camel to lion to child. And in setting the record straight about the meaning of Nietzsche’s concept of the superman, shows us how we ourselves can become the new man.

Zarathustra, through Osho’s eyes, is first and foremost a human being who can laugh and shed tears just like the rest of us. Zarathustra is speaking as if to a friend, sorting methodically through the ins and outs on the path of truth, giving each aspect a thorough and single-pointed attention. Each of Osho’s talks thus becomes a lesson on a very specific theme, and each theme is a step deeper into the journey toward becoming “a god that can dance” – a person who dares to shed all the bondages of false virtues and values, and dance in innocence and joy with each moment of life.

Excerpt from ‘Zarathustra a God That Can Dance’, Chapter 1

Friedrich Nietzsche is perhaps the greatest philosopher the world has known. He is also great in another dimension which many philosophers are simply unaware of: he is a born mystic.

His philosophy is not only of the mind but is rooted deep in the heart, and some roots even reach to his very being. The only thing unfortunate about him is, that he was born in the West; hence, he could never come across any mystery school. He contemplated deeply, but he was absolutely unaware about meditation. His thoughts sometimes have the depth of a meditator, sometimes the flight of a Gautam Buddha; but these things seem to have happened spontaneously to him. ‘Zarathustra a God that can Dance’

He knew nothing about the ways of enlightenment, about the path that reaches to one’s own being. This created a tremendous turmoil in his being. His dreams go as high as the stars but his life remained very ordinary – it does not have the aura that meditation creates. His thoughts are not his blood, his bones, his marrow. They are beautiful, immensely beautiful, but something is missing; and what is missing is life itself. They are dead words; they don’t breathe – there is no heartbeat.

But I have chosen to speak on him for a special reason: he is the only philosopher, from East or West, who has at least thought of the heights of human consciousness. He may not have experienced them; he certainly has not experienced them. He also thought of becoming a man again. That idea, of descending from your heights into the marketplace, descending from the stars to the earth, has never happened to anybody else.

He has something of Gautam Buddha, perhaps unconsciously carried over from his past lives, and he has something of the Zorba. Both are incomplete. But he is the only proof that Buddha and Zorba can meet; that those who have reached to the highest peaks need not remain there.

In fact, they should not remain there. They owe something to humanity; they owe something to the earth. They have been born amongst human beings; they have lived in the same darkness and in the same misery. And now that they have seen the light, it becomes obligatory that they should come back to wake up those who are fast asleep; to bring the good news – that darkness is not all, that unconsciousness is our choice.

If we choose to be conscious, all unconsciousness and all darkness can disappear. It is our choice that we are living in the dark valleys. If we decide to live on the sunlit peaks, nobody can prevent us because that is also our potential.

Man is so deaf, so blind that it is almost impossible for him to understand people who are talking from higher stages of consciousness. He hears the noise but it does not bring any meaning to him.

Nietzsche is unique in this sense. He could have remained an extraordinary, very superhuman philosopher, but he never forgets for a single moment the ordinary human being. It is his greatness. Although he has not touched the highest peaks, and he has not known the greatest mysteries, whatsoever he has known, he is longing to share with his fellow human beings. His desire to share is tremendous.’ Zarathustra a God that can Dance’

I have chosen to speak on a few fragments which may be helpful to you, for your spiritual growth. Nietzsche himself had chosen Zarathustra to be his spokesman. Something about Zarathustra has also to be understood. Amongst thousands of great mystics, philosophers, enlightened people, Nietzsche has chosen as his spokesman, a very unknown person, almost forgotten to the world – ‘Zarathustra a God that can Dance’